1st Issue Printed at Waterlow & Sons Ltd. London on unwatermarked paper. Density - 93.5 grams per square meter Issued in 1918. ‘Currency Note Sarkar-e-Ali’ in Urdu meaning Government Currency Note in top centre. Two five digit serial numbers on either side. Coat of Arms on either side on top. Denomination in words clockwise in Marathi, Telugu, O.S. Rs. TEN and Kannada. DUS RUPYE in Urdu in lower two corners. Promise text in three lines with the denomination reading “DUS RUPYE SICCA OSMANIA” in words in centre. For the Government in Urdu in lower right and signature in lower left. Date panel in lower left. Denomination in numerals in Siyaq, Telugu, Marathi, Kannada and English in a panel on either side.

10 in centre, numeral in Siyaq in top left, Telugu on top right, Kannada on lower right and Marathi on lower left.

Type 1 on either side.

Some notes of this type were recovered from the shipwreck of S.S. Egypt which was carrying a consignment of Hyderabad notes of 5, 10 and 100 Rupees from England to India. It sank off the French coast. These notes are unsigned and bear a rubber stamp with an inscription that gives details of the shipwreck and indicates that they have no value. They are listed here as ‘Sea Salvage’ notes.
R.R. Glancy Signed as “Moin-ul-Muham Finance”. 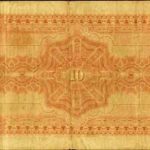 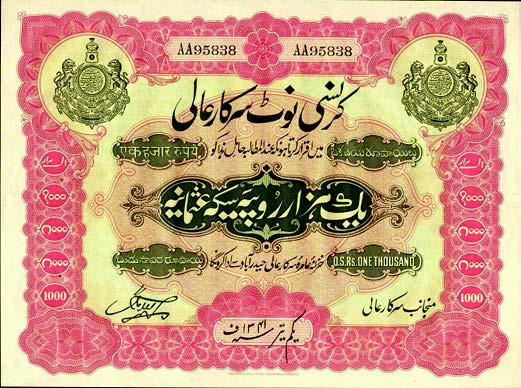 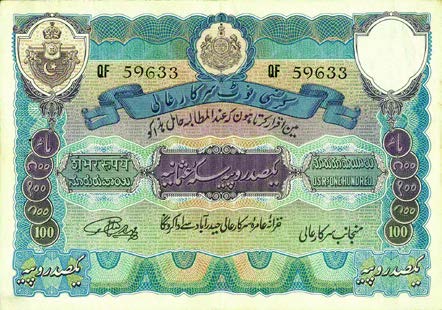